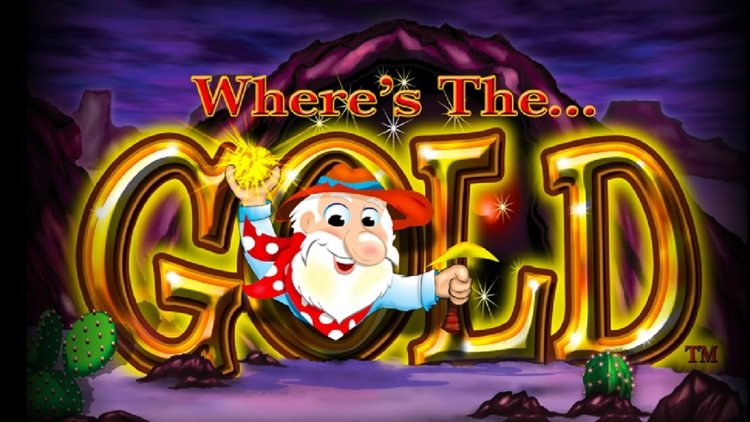 Where`s the Gold Pokie by Aristocrat is a classic 5-reel slot game released in 2003. Even though the game is nearly 20 years old, many people still play it. This game allows you to become a gold miner in a small mountain town. Find the biggest gold deposit to win the 1000 coins jackpot!

The pokie features 25 paylines and a decent RTP of 94.9%, which makes it good enough for real money play. It has nice cartoon-style graphics and a novice-friendly interface. Where`s the Gold pokie is a great option for novice people since it is very easy to play.

The paytable in this game is rather standard:

Remember that you can check the paytable any time you want by hitting the «Info» button at the bottom left side of the game screen. 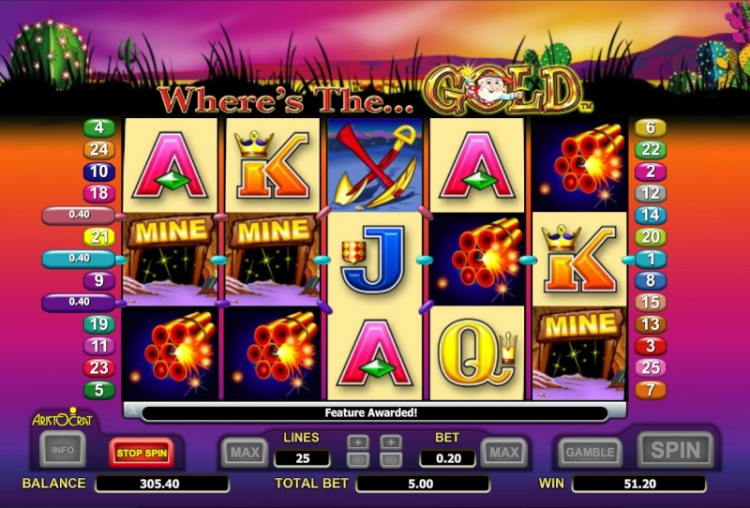 You can start the game as soon as you run Where`s the Gold pokie on your mobile device or computer. Feel free to select your wager size using the “+” and “-“ buttons located next to the bet indicator. The bet ranges from 0.02 to 4 coins, so this slot is perfectly suitable for both low rollers and high rollers.

Additionally, the player can manually select up to 25 active lines. Choosing any number of active lines using the “+” and “-“ buttons. When you are done selecting the paylines and bet, press the “Spin” or “Auto Spin” to spin the reels.

Where`s the Gold pokie will award you with free spins if you get at least 3 scatter symbols anywhere on the playing field. At the start of this feature, you will need to choose one of the five characters. The number of free spins depends on your choice. You can get up to 10 free spins at once.

Additionally, the pokie offers the Gamble feature, which can multiply your total win during the base game. Just press the “Gamble” button under the reels and choose one of the three options;

If you guess the right color, your stake will be doubled. Otherwise, you will lose your money.
Unfortunately, Where`s the Gold pokie does not offer any other bonus features except for these ones.

Aristocrat is a trustworthy software provider with many fans from all over the world. The company has been operating in Australia since 1953, which makes it the oldest Australian casino games developer. In 1987, Aristocrat entered the virtual slot market. Since then, the company released numerous slot machines.

At the time of writing, Aristocrat is licensed in over 200 jurisdictions and operates in 90 countries. Given that fact, you can easily find and play its slots regardless of your location. Do note that most of its pokies are distributed by other gambling companies such as NYX gaming or Game Account Network. 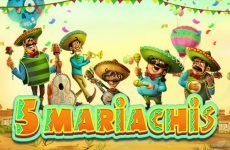 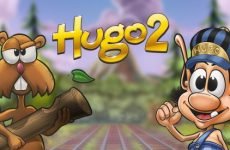